It’s bizarre to think but with just three rounds gone in the 2020 Shute Shield, 10 sides have already played a quarter of their season in this Covid-19 affected competition.

Randwick, Northern Suburbs and Sydney University have enjoyed stellar starts to their campaigns with three wins from three to share the lead at the top of the ladder, while Gordon and Southern Districts are also unbeaten having played one match less with the bye.

But who is lighting it up in the individual points and try-scoring stakes?

Round One kicked off with a bang as 300pts were racked up around the grounds. Leading the way was Gordon’s new pivot, former Brumby and Samoan international Rodney Iona, who bagged 15pts in an impressive debut as the Stags put Easts to the sword 35-24 to get their promising season underway in style.

Not far behind was 2018 Roscoe Fay Trophy winner Christian Kagiassis, who had a rare off day with the boot in Southern Districts’ win over Eastwood at Forshaw Park, but still added 14pts to the Rebels tally as the new regime under head coach Todd Louden began with victory. Expect ‘Kaggy’ to push hard in the race to be the competition’s leading points-scorer once again this year.

He was matched by returning Warringah flyhalf Tom Halse, whose 14pts was in vain for the Rats against Sydney University, while Connor Winchester bagged 11pts off the bench as Northern Suburbs came home with a wet sail at Drummoyne Oval to down West Harbour 32-3.

Rodney Iona has made an impressive start to life at the Highlanders – Photo: Andrew Quinn

There was a smaller pool of achievement in the try-scoring stakes, with doubles to Jackson Mohi (Randwick), Harry McLennan (Souths), and Max Douglas (Manly) in their side’s wins over the Hunter Wildfires, Eastwood, and Western Sydney Two Blues respectively.

Despite a few cobwebs having been blown away in week one, individual honours were hard to come by in round two with several heavyweight clashes bringing the average scoreline down by seven points per match, with Sydney Uni’s 10-6 slog against Manly the lowest aggregate score this scribe can remember in 12 years of covering Sydney 1st Grade rugby.

Promising young no.10 Tane Edmed filled his boots as the Woodies travelled up to Newcastle to take on the newboys – Hunter Wildfires, the former Randwick colt claiming a 16pt haul as the Woodies grabbed their first win of the season 46-11. But Rodney Iona wasn’t far behind, Gordon’s on-field conductor in double figures for the second week in a row as the Two Blues capitulated at Chatswood Oval to go down 64-0.

That game also saw a brace of brotherly doubles as Highlanders skipper Jordan Goddard and younger sibling Harrison shared four meat pies, while Reece Mau’u also nabbed a double for Norths as the Shoremen upset the return of Penrith Emus to the competition with a 52-3 dispatching.

All of which takes us up to last weekend, where points were aplenty, with 312 in total across the six games.

Last season’s joint-top points-scorer James Kane was the man to catch, crossing the chalk twice and adding seven conversions for a 24pt tally as Sydney Uni saw off the Wildfires 59-10, with two fellow Students also claiming doubles from opposite ends of the spectrum in the shape of hooker Patrick O’Doherty and fullback Tim Clements. James Kane has carried on where he left off in 2019 for the Students – Photo: AJF Photography

Tane Edmed continued his scoring feats with another 12pts for Eastwood in their 42-10 win over West Harbour. But special mention has to go to hooker Ed Craig who tucked into a hat-trick of meat pies for the Woodies in the same game. Watch out Folau Fainga’a!!

Randwick’s clash with the Western Sydney Two Blues didn’t go to script in the first 40 minutes, with the home side fighting gallantly to hold the visitors to a scoreless draw at half-time. But a try after the restart opened the floodgates, with doubles for the impressive Dylan Pietsch and Maurice Longbottom.

With David Horwitz missing, Fred Dorrough stepped into the flyhalf role and grabbed a try and five conversions for the Galloping Greens for a 15pt haul, one ahead of Souths utility back Christian Kagiassis, who bagged a second five-pointer for the season as part of his 14pt contribution to the Rebels far from comfortable 29-14 win at the foot of the mountains over Penrith. Lock Isoa Nasilasila crossed the chalk twice in the same game for the visitors.

The most experienced flyhalf in the comp, Norths’ Angus Sinclair, is enjoying a fine start to the season, and his 13pts was a valuable addition to the Shoremen’s 28-19 away day win over Manly as the new-look Red and Blacks continue to impress. And one man who used to ply his trade at the Village Green, Nic Holton, matched Sinclair’s effort with 13pts of his own for new side Eastern Suburbs, but unfortunately for the Beasties it was on the losing side as a Warringah team desperate to open their account for the year won a tight one 31-28 at Rat Park, with 10pts from their no.10 Tom Halse.

All of which leaves James Kane blazing a trail at the top of the Roscoe Fay standings, with Tane Edmed four points behind and ahead of a tightly-packed chasing bunch of star turns in Rodney Iona, Christian Kagiassis, Angus Sinclair and Tom Halse. 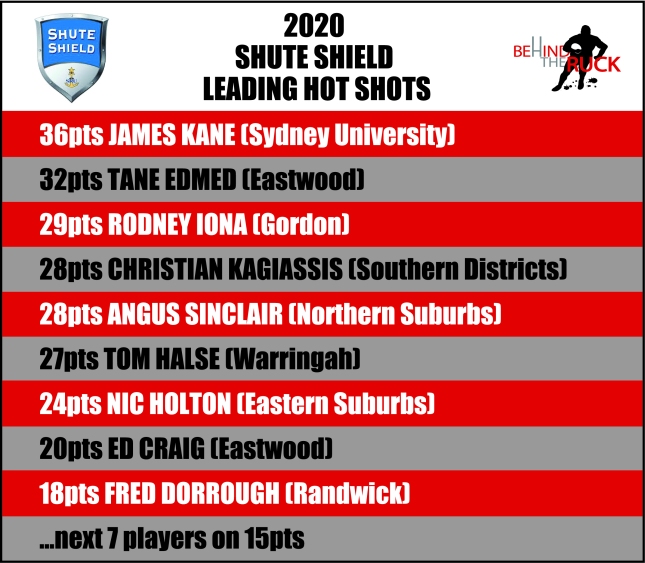 On the try-scoring front, that hat-trick from Ed Craig has sent him to the top of the charts on his own with four pies, ahead of six players on three, and a whopping 20 players with doubles. Great to see Henry Clunies-Ross and Matt Gonzalez back and doing so well in 1st Grade after suffering their own injury nightmares in recent seasons, while tyros Max Douglas (Manly) and Charlie Smith (Easts) are definitely players to keep an eye on as the season progresses.