At half-time at Lidcombe Oval and with the match still scoreless, this weekend scribe was thinking he may just have chanced upon the boilover of the season. Alas, for those of a Western Sydney Two Blues persuasion it wasn’t to be, an Aussie Sevens-fuelled Randwick side simply too hot to handle in the second forty as they racked up a 42-0 final result that paid scant justice to the effort the home side had put in.

Had they managed to find a way across the chalk themselves in that impressive opening stanza, who knows where this one could have ended up. But their physicality and determination in defence wasn’t matched by their execution and nous in attack, leaving themselves open for the Galloping Greens to do exactly that after the break, with the pace and counter-attacking skills of Dylan Pietsch and Maurice Longbottom in particular to the fore, as the visitors ticked off their third win from three for the first time since 2016.

The home side set their stall out from the off, building some early phases before pushing the pass but applying a uniform choke hold on the recipient Randwick ball-carrier to keep him off the deck and win a scrum put-in inside the 22. However, the giant Two Blues pack that had caused Manly plenty of headaches a fortnight ago couldn’t turn the screw, conceding the first penalty of the match for a lost bind after a couple of resets.

Randwick then almost broke through from their first attack off the ensuing lineout. Lachie Miller – given the green light by the judiciary during the week after his red card against Warringah the previous Saturday – tore a path upfield and into the red zone where he was just about tagged. But the quick recycle was a little too hasty and the ball was lost in contact, and the first half template had been set.

A forward pass from Simon Kennewell cruelled a run into the corner for speedy winger Christian Yassmin as the visitors continued to try and outpace their hosts. But this Two Blues outfit clearly had a flea in their ear from coach Joel Rivers and his staff about their lacklustre effort against Gordon in round two, and the intensity and physicality they were bringing to their defence was not making life easy for their opponents early doors. 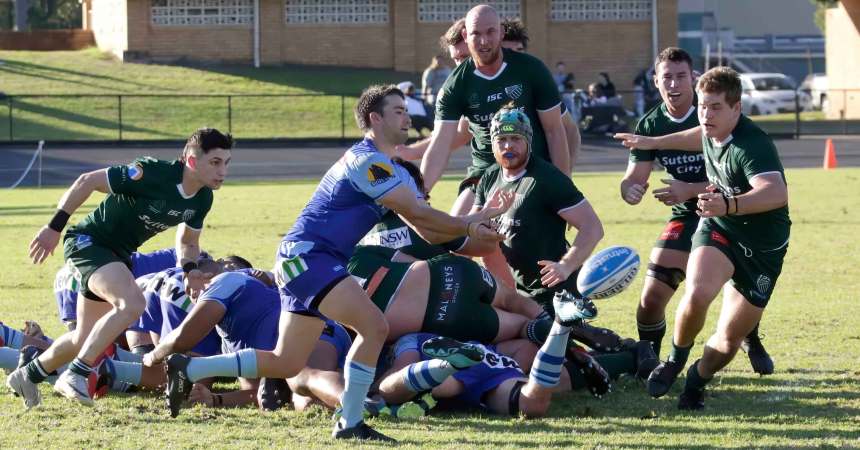 The home faithful were off their seats in the 12th minute to salute what they thought was a surprise opening score, after a crossfield kick from flyhalf Rory Garrett sat up nicely for the rapid frame of Niko Dalivusa to scoop up and race for the line. However, much to the dismay of the Western Sydney lower graders gathered on the hill behind the posts, the touchie had his flag raised immediately to signal the wingers feet had already grazed the sideline.

Back came the Wicks, turning up the heat and setting up camp inside the Two Blues 22 off the back of successive penalties – an inevitability that would go on to haunt the home side further down the track. But every time they looked like they were odds-on to concede they pulled something out of the fire, be that a turnover to thwart a lineout maul, or a bell-ringing tackle in midfield to force a knock-on.

They were helped somewhat by Randwick’s impatience to score, as a wave of myrtle green-clad young tyros were guilty of overplaying their hand or forcing matters with a needless offload, or simply failing to adhere to the oldest adage in rugby – you have to go forwards before you can go wide.

Five penalties in a row drew a warning for Two Blues skipper Riley Jacobson from the referee, as the game ticked over into the second quarter with an unlikely pair of donuts on the scoreboard. But they saved the day again with a lineout steal 10 metres out, backed up by a seismic hit from blindside Sione Fifita to spill the ball when Randwick tried to return fire.

Another lineout steal on halfway in the 27th minute gave lock Tuitakau Kioa a charge into enemy territory, and when the Wicks went off their feet and conceded a penalty, the Two Blues had the chance to open the scoring. Unfortunately for them, Garrett’s kick from distance fell well shy of the uprights, but due warning had been served. They weren’t here just to play the role of punching bag, they had some jabs of their own to throw.

A high tackle soon had them back in the 22 as confidence began to visibly course through the home side. But the lineout yips were catching, an overthrow picked off by Randwick and cleared as both sides struggled to make territory pay at the pointy end of the field.

With five minutes to go before the break, the visitors inability to breach the blue wall was beginning to cause frustration and a few scratched heads amongst their ranks. Time and again they carried, time and again they knocked on under pressure, although credit to the livewire efforts of scrumhalf Tyzac Jordan, who was doing his best to ignite his charges attacking flame.

They finally got a leg-up for their efforts in the 36th minute, Two Blues fullback Robert Duff sent to the bin for slowing down the ball, and a couple of damaging surges from Dylan Pietsch and Kennewell almost had them over the elusive chalk. But another crucial turnover kick-started a Western Sydney counter-attack, and when Lachie Miller illegally nudged the ball out of the dangerous Dalivusa’s grasp on the floor, the Aussie Sevens star joined Duff on the naughty chair.

After averaging 23pts conceded per half so far in this year’s competition, the Two Blues claimed a moral victory as they walked to the sheds with the scoreboard still untroubled. However, the bubble of excitement that gently floated around the old oval at half-time amongst the success-starved faithful, was summarily pricked inside three minutes of the restart.

A terrific kick-chase from Pietsch off a long punt from Dorrough, pinned Liam Tully inside his own 22 and earned a scrum put-in in prime position. And this time the Wicks clicked into gear, inside centre Kristian Jensen running hard and straight to get them over the gain line, before quick hands worked the numbers for the industrious Pietsch to run in the long-awaited opener.

The challenge for the Two Blues was how they responded to the early setback, a task amplified when they went down to 13 men straight from the kick-off after lock Sev Domoni was shown a yellow card for a tip tackle. Summarily buoyed, the visitors almost had another as they started to stretch their legs in the extra space, Pietsch tearing over halfway and finding Jensen, only for the home side to scramble well.

Randwick’s attacking arsenal wasn’t exactly hindered by the arrival of Maurice Longbottom on 56 minutes, the Sevens speedster on at scrumhalf in place of the promising Jordan. He joined the fray just as Western Sydney put together their most concerted phaseplay of the match off a lineout, building slowly and trying to stretch the opposition line to find a hole. But having worked so hard to get into a position to strike, impatience struck for a team with just one five-pointer to its name in 2020, and it cost them dearly.

A speculative kick over the top from Garrett landed in the hands of Wicks replacement Triston Reilly, who duly fed Miller – now returned from purgatory. The elusive fullback jinked his way out of the 22 and found Kennewell, who brilliantly chipped over a defender down the sideline, regathered, and had Longbottom on his inside for a run under the posts to finish off an 80-metre counter.

If that hadn’t knocked the wind from the Two Blues’ sails, a third try inside 90 seconds was a knockout blow. The increasingly influential Jensen was the instigator, getting his team from one 22 to the other before the forwards took up the gauntlet with some good old fashioned hard yards. And with the home side starting to fall off tackles as their fate loomed, the green wave was too strong to resist, Dorrough finishing it all off with a hit and spin to dive for the line.

Nick Blacklock has been a tremendous servant of the Two Blues and club rugby over many years, but his next significant involvement in this match wasn’t one the poor hooker will want to add to his highlight reel. Struggling to get some kind of foothold in the contest, the hosts were being forced back in possession thanks to the Galloping Greens’ linespeed, and when Blacklock juggled a pass and attempted a no-look offload as he fell with the ball, he wasn’t aware of the alert Pietsch lurking behind him for a 60 metre-dash into open field for his second of the afternoon, and a 28-0 lead.

Miller was a touch fortunate not to receive his marching orders for a second yellow after failing to retreat the full 10 metres off a quick tap before intercepting a rampaging Fifita, but again the Two Blues’ white line fever continued. And with frustrations boiling over, a skirmish in backplay led to a lengthy referee-touchie conversation that ended with a third yellow card for the home side for Levi Dodd, although, I’m not too sure they got the right man…

‘Catch me if you can’: Maurice Longbottom races away for his second – Photo: Ric McLallen

Playing just under half an hour with 14 men and chasing a lost cause was a visibly attritional cross to bear, with a bevy of Two Blues taking a knee across the park after their next defensive effort for no other reason than self-preservation. And that isn’t a scenario you want to be in with 10 minutes to go and four of Australia’s finest exponents of the short form of the game running at you.

And so it came to be, Longbottom playing as if he was back in the stadiums of Hong Kong or Dubai as he scooped up from the back of a ruck just outside his own 22, stepped, swerved, and hit the afterburner button to see off the cover defence in devastating fashion for try number five.

They weren’t done yet, Miller going another 60 metres to find Nathan Den Hoedt in support, and the skipper showed lovely hands and composure in contact to gift replacement Declan Leaney with the killer pass credit for Reilly to rubber stamp victory.

They’ll be happy to forget their first forty minutes, but a young Randwick outfit eventually ticked another box with a bonus point, and no defence in the comp will relish facing the attacking weapons they have at their disposal when they get it right.

All in all, a proud effort from Western Sydney that for a fleeting moment in time promised something special. But it wasn’t to be, and the fear moving forward is that while their ability to stay in the contest defensively may continue to improve and ensure they are no pushover, until they can unearth some creativity or execution in the final third they are only bringing one arm into the fight.