Randwick snuck home with a late penalty to edge out a gutsy and stubborn West Harbour under the lights at Drummoyne Oval last Friday night. Having opened up a 17-3 lead and seen the Pirates reduced to 14 just after the half hour, the visitors were looking odds-on for a healthy bonus point victory. But a try just before the break that brought with it a yellow card saw Wests go to the sheds with renewed hope, and when the forwards turned up the heat and repeated the dose 10 minutes into the second half to draw level, all bets were off. The home side continued to ask questions up front but a long range penalty and drop goal attempt that both missed the posts were their best chances to snatch victory, before Randwick were awarded a penalty from a rare foray upfield with a few minutes remaining, and flyhalf Colby Miln slotted the winner to break Pirates’ hearts.

Behind the Ruck got the post-match reaction from both camps…

“I think we played eighteen minutes worth of footy in that first half and looked great. We played in the right areas of the field and played the tempo that we wanted to play, but it’s so much easier to slow a game down than to speed it up, particularly when you’ve got a dominant scrum like they do. There were a couple of handling errors in the wet and the dew and then it was scrum, scrum penalty, scrum, and all of a sudden it’s a stop-start affair and it stayed like that for pretty much fifty or sixty minutes.

“When they went a man down we knew that it’s fools gold thinking you can just go to that wing all the time and find the space, and we also knew that they were going to take it to us in the pack. So we had to stem the bleeding there and continue to mount pressure through phases and unfortunately, we just couldn’t do it. We back ourselves to be adaptive and be able to play any style of footy but we struggled to match it with them in that tough slog.

“Their set-piece was just too heavy and disruptive and every time it looked like the game was going to open up there was a handling error and another scrum. And if you’ve got such a heavy and dominant scrum as they do, why would you play away from it? They used it to get back into the game and used it stop us playing any footy, and good on them, it’s a real weapon for them. If you’ve got a dominant scrum and a good goal kicker and a couple of outside backs that can put the ball down, you’ll win some games for sure.

“You always know, regardless of the quality of the ref, when they do issue a first half red card – which was unfortunate because it was a double yellow – but when they do they’re always going to look at the opposition and make sure they’re squeaky clean. We knew we had to be otherwise we were going to get pinged and that we’d probably find a card, and we gave him an excuse straight away and found one. Then we found another not too long after, so it’s one thing knowing not to do it, it’s another not actually doing it.

“There’s some things for us to learn from a footy perspective, and there’s some things to learn about how to try and wrestle back momentum or slow momentum, and how to try and play the whistle. There were a number of occasions where West Harbour knocked it on and if we pick it up and play we can get the ball back in play, but if we’re not actively trying to play then the ref is just going to blow it and go to the scrum, which is exactly what we don’t want. We’ll also have a good look at the scrum because to be so one-sided it’d be interesting to go back and see what it looked like on tape. We haven’t had a situation like that this year, so whether Wests were that good or we were that bad or what it looks like in review will be interesting.

“At the end of the season people don’t remember the performances, they remember whether you won or lost and how many points you accumulated along the way. We would have preferred five tonight but we’ll take four and we’ll keep moving. We won’t do much of a post-game chat, just take the points, get out of here and be happy. We’ve just got to keep getting points and put ourselves to be in the position to get in that top eight  and once you’re there, the game changes again.

“Our platform has been something that we’ve been working really hard at, both scrum and lineout. We make no bones about that and anyone who watches our game can see that it’s definitely a work-on for us, but it is improving. Hopefully, we’ll continue to develop the players we’ve got and get a couple back in that tight five space, which will help. And I think as that platform improves you’ll see our performances improve as well because we’ve got plenty of footy in us, and once we get front-foot ball and a reasonable ruck speed we’ll be hard to stop.”

“We’re gutted, it’s probably the worst I’ve seen the boys because they knew that they were in this game and that it was a game they could have won had we played the football we needed to play.  We lost a player with fifty minutes to go so I think the boys should be commended for their guts and their attitude. They worked really hard.

“We kicked ball away in that first quarter and didn’t stick to our plan, whereas later in the second half our kicks were contestable because you can’t give them space. Their thirteen has just come back from the Aussie Sevens, Nick Chan is a great footballer and Christian Yassmin loves scoring tries, so we were silly, we didn’t stick to our plan. When we did you saw how much they hated life. They don’t want that confrontation, they want space and they want to play that myrtle green rugby.

“We turned a ball over prior to Kuki (Ma’afu) scoring by running a switch play, which means you have to change direction on a soft pitch. So we just sent the message out that we don’t need to run switches, we just need to carry the ball and run over these blokes. Then Kuki scores and we get another score after half-time because we’ve narrowed them down and broken them with our scrum and got a couple of their boys in the bin, and it was game on. Then it becomes a contest as to whoever can play their brand of rugby the most will win the game, and we lost by three.

“Forcing them to scrum was something we wanted to do, and forcing them to infringe as a result. That’s what happens when you’re under pressure. For the first time in a long time last week West Harbour won the penalty count, only because we’re learning to hold the ball and build pressure. The team that holds the ball and builds the pressure is normally the team that gets the referee in their back pocket.

Kuki Ma’afu scored against his former side to get the Pirates back in the contest before half-time – Photo: J.B Photography

“I’m really proud of our boys to keep the opposition at bay but you’ve got to keep them at bay and you’ve got to put points on the board. We’ve worked out now that having field position isn’t going to win you games of football. The team has a good level of belief, we’ve just got to truly believe in how we want to play the game and be disciplined in playing the game that way. You’re a couple of wins away from getting back in the top eight, and we’ve been neglectful in taking our bonus points that we’ve fought hard for.

“We’re halfway through the season now and obviously I’m a new coach but it’s not a new group of players. We’re not like other clubs, we haven’t gone out and bought any because we can’t afford to and thirteen of my starting fifteen tonight were here last year. But they’re starting to see the game a bit differently and they’re playing a bit differently. I think the footprint is growing and today you saw a bit of that.” 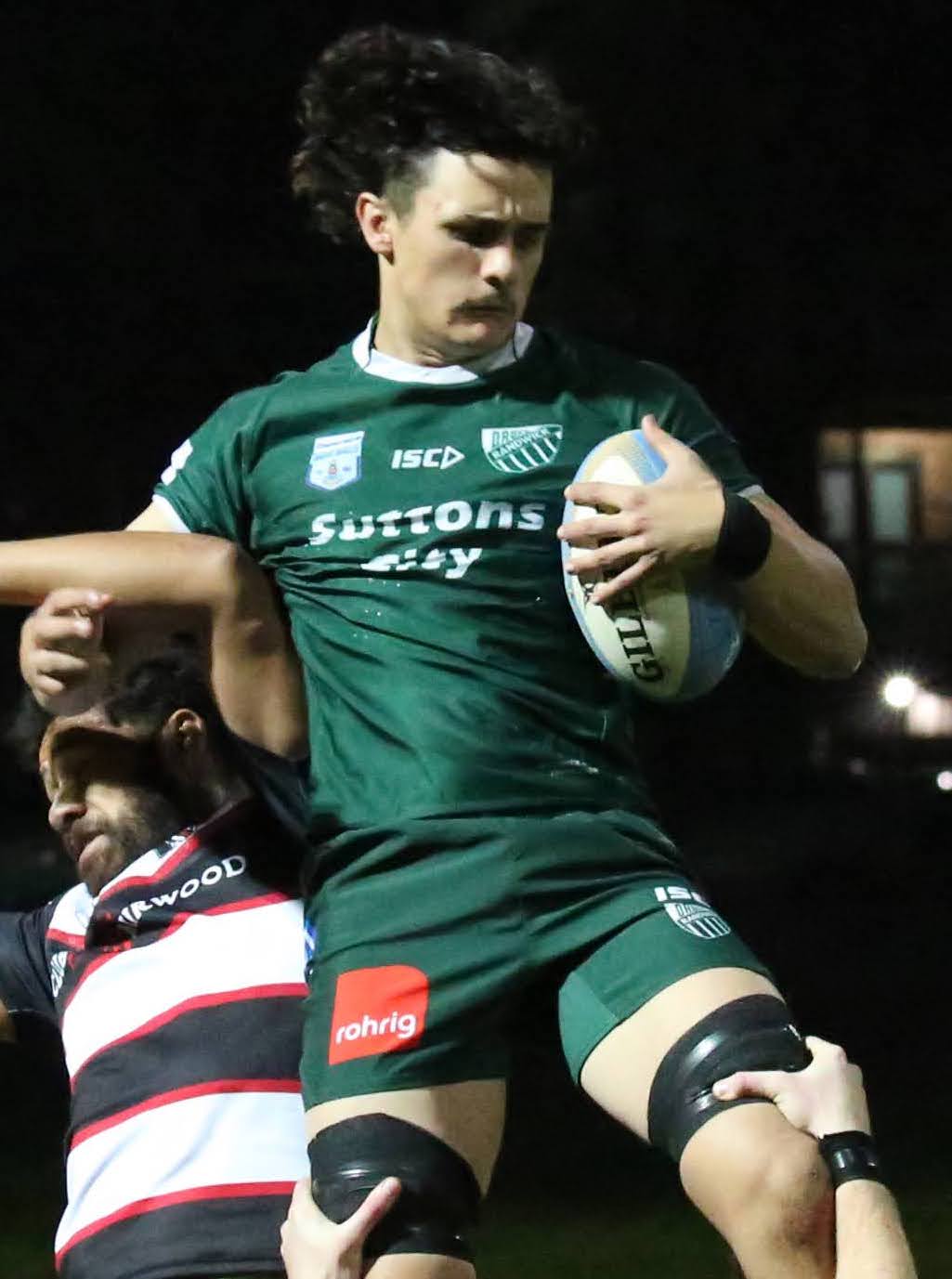 “We completely played into the style they want to play. We spoke all week that we didn’t want to go to stoppages and scrum to scrum, and that’s exactly what we did in that second half. We’re lucky to get away with the win but we definitely didn’t want to play that way. The first fifteen minutes was how we wanted play, the next sixty-five, not so much.

“I don’t think we mentally switched off, there were just key moments in that game where we could have iced it. For example, we could have improved our restarts. If we’d caught the three restarts after our kick I reckon it would have been a different story, we would have played down their end. But there were too many red penalties, as we call them, in our half, and they just got a roll on and the score ended up a lot closer than we thought.

“In all honesty I don’t think our scrum was off tonight. I’m not blaming the conditions but our boys weren’t expecting this softer pitch, and with them having the weight on us that would have definitely helped them because as a smaller pack we like to get low, but there just wasn’t the grip.

“There were too many penalties, too many dropped balls and too many errors and we crept straight back into the way they wanted to play the game after the break. We couldn’t get out of our half, which is unusual for us because last week we played such a good territory battle and we played so well and we wanted to do that again tonight. But our cohesion just wasn’t there. However, there’s always next week and we’ll take a lot from it.

“Hunter was a big turning point for us, a real fork in the ground. It was definitely a game we should have won like Easts and if we had, today would have been a different story. But against both Easts and Hunter it really hurt us losing in the last few minutes, so we know what that feels like, and that mentality switch tonight for us to win it late was a positive because we proved that we can get out of those situations.

“Our set-piece needs to improve and we know that, we know what to do but we’ll get there. Also our game management – we can’t be on one week and off the next. But we’re a young mob and we’ll focus on that during the week and move forward. We were third-last three weeks ago and now we’re up to fifth or sixth depending on other results so it’s anyone’s game, which is exciting. There’s no outliers anymore.”