They took their time, but the NSW Waratahs produced enough attacking prowess to see off the Melbourne Rebels 50-23 in the end at Allianz Stadium yesterday afternoon, having led by just six points on the hour. Israel Folau was a standout figure for the home side with a double, and more of the trademark incursions into enemy territory than we’ve seen for large parts of 2017, and he was ably backed up by the ever reliable Michael Hooper, and a cohesive display from halves combo Nick Phipps and Bernard Foley.

The bonus point win lifts the Waratahs up to second place on the Australian conference ladder, four points behind the ACT Brumbies. While the Rebels remain firmly rooted at the bottom with just one win from their 11 matches this season.

The visitor’s chances took an immediate setback when Reece Hodge copped a faceful of Israel Folau’s elbow in a tackle in the first two minutes – accidentally – and the game had to be stopped while the Wallaby utility back received treatment. His afternoon was over before it had begun but thankfully, he was able to give the thumbs-up to the crowd as he disappeared down the tunnel on a medicab.

A scrum penalty from the restart gave the Rebels a chance to open the scoring, only for Ben Volavola to push his attempt just wide. But the former Waratah made no mistake a couple of minutes later when the home side were pinged for not rolling away after the visitors had built 10 phases.

Having had precious little ball, the Waratahs struck the first five-point blow from their first possession inside the opposition half. Neat hands from the forwards opened the door for Bernard Foley to glide through with customary opportunism, and he had his partner-in-crime Nick Phipps off his shoulder to slide under the posts. 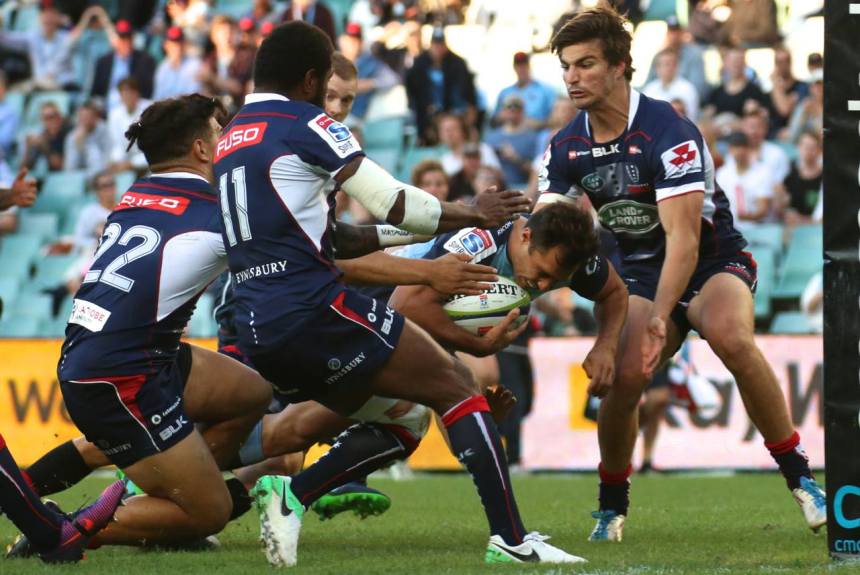 A determined Nick Phipps powers over for the Waratahs’ first – Photo: AJF Photography

Volavola returned fire with a second penalty when Tolu Latu went off his feet, and the Waratahs disciplinary issues weren’t going away when Dean Mumm then strayed offside, much to the frustration of both referee Angus Gardner, and his captain Michael Hooper. And yet, from the very next breakdown, the hosts coughed up another penalty through Ned Hanigan, only Volavola’s errant boot letting them off the hook.

So when Latu went off his feet again in the 16th minute, it was no surprise when the Waratahs rake saw yellow. That opened the door for the Rebels and they took advantage almost immediately. Muscling up at the next scrum, they forced another penalty against a depowered pack, and the predatory Amanaki Mafi pounced to tap-and-go and find the line.

Volavola’s third wayward kick from the conversion meant his side only held a slender four-point lead, instead of a potential 19-7 advantage. But with the dangerous Mariko Koroibete, maturing as a rugby player with every game, they threatened to add to their good early work. And they should have made more of the ex-leaguie’s powerful surge down the sideline on 26 minutes, but a combination of poor decision-making and the scramble defence of Taqele Naiyaravoro, prevented them from taking advantage of a four-on-three situation.

Ironic cheers from a disgruntled Allianz Stadium crowd greeted the first penalty conceded by the Rebels just before the half hour, but they were in fine voice moments later when Dean Mumm went over to celebrate his 100th start in Super Rugby with a try. That it was allowed to stand at all was a much-needed slice of fortune for the Waratahs, with a clearly forward pass from Hooper in the build-up being missed by the officials. But the simplicity of the move from thereon in was what stood out, just basic catch-and-pass from coast-to-coast giving the veteran loose forward an easy finish in the corner.

Bernard Foley produced another masterclass of attacking play in the no.10 jersey Photo: AJF Photography

It proved to be the fillip the home side needed, and from their next attack they plundered a third. Foley asked the initial questions, Will Skelton and Phipps went close but crucially sucked in Rebels defenders and eventually, with the crowd screaming out the obvious overlap that was available, the ball was sent wide – via a lovely tap-on from the deft hands of Foley – for Ned Hanigan to stroll home and score his third Super Rugby try, and second against the Rebels in 2017.

Foley’s conversion confirmed the shift in momentum as they established a 19-11 lead, and suddenly unleashed, the Waratahs went for the jugular before the break. They got their reward off the back of a brilliant turnover by the effervescent Hooper after the siren, and with Phipps and Foley probing for an opening, it was the giant Nayaravoro who offered it. Three Rebels jerseys were left in his booming wake and the predatory Israel Folau was on hand to profit for try number four, and a half-time advantage that had seemed rather unlikely just 15 minutes earlier.

The Waratahs wasted an opportunity to pour some more heat onto the Rebels five minutes into the second half, but a poorly executed lineout let the visitor’s off the hook, and their profligacy was punished soon after when the Rebels went in for their second.

It came off the back of more Waratahs ill-discipline, Bernard Foley sent to the bin for playing at the ball in mid-flight and preventing a potential try in the process after Mafi had made another telling line break. Rebels scrumhalf Ben Meehan took it early, Mafi was again involved to go within a metre, and replacement Jonah Placid scooped up and dived over the ruck to find the chalk.

Despite being a man down the home side rallied, and it was their big dogs who stepped up. A nice line from Hooper splintered the Rebels line, and when the footwork of Folau got him between two would-be tacklers, you would have got short odds on the try-machine not finishing the job for his 43rd Super Rugby five-pointer.

Back came the Rebels and just before the hour, they made it a six-point ball game with a second for Placid. The influential Mafi broke from his own 22, raced 40 metres upfield and found Sione Tuipulotu in support. The cavalry arrived for both sides but the Rebels spotted space out wide and Volavola put Placid in for his double.

29-23 with a quarter to go then, but just as the home faithful were getting nervous, Folau stepped up to put in motion the move that broke the Rebels’ resistance. Collecting a quick throw just outside his 10 metre line, the star fullback arced his way over halfway to find Foley, who swapped passes with replacement Bryce Hegarty before fellow replacement Jake Gordon popped it up for captain marvel Hooper to juggle, regather and race home.

The result blew out with a late converted double seeing the Waratahs hit the half century in front of their home crowd for the first time since 2010. A powerful surge from the hardworking Hanigan paved the way for the first, and after being initially held up a metre from the line, the Waratahs recycled for Paddy Ryan to slip a tackle and pop up a tidy offload for fellow front-rower Damien Fitzpatrick to go under the posts.

And the icing was put on the cake in the final minute, another incision from Folau splintering the Rebels line and Hegarty showing a clean pair of heels to streak away to the corner and seal the Waratahs’ biggest win of the year.